It is difficult to find someone in Cuba that doesn’t know Elpidio Valdés. Children today may be excited about Mickey Mouse, Fernanda, or Dora the Explorer, but they know at least one phrase from the iconic cartoon created by Juan Padrón. The younger Cubans might not know as much about the heroes of Cuba’s wars for independence, but they do know the mambí of the animated show.

Some may not pay attention to history classes at school, or teachers might teach the contents for kids to learn it parrot fashioned, but if many of us today know what a trench was, or the leather cannons in our history, the military bugles, the types of machetes or firearms, guerrilla tactics and a part of the life in the 19th century Cuba, it is thanks to Juan Padrón and his oldest “son”, the one who yesterday celebrated his 50th birthday.

With Elpidio we traveled back in time. It allowed us to know each other a little more as Cubans, our customs, part of them even incorporated or brought back by the hand of that character and the entire universe that surrounds him, created by that comic master who was Padrón, who by misfortune left us with so much left to do.

That little kind-of-ninja cartoon that appeared for the first time in Pionero magazine on a day like this in 1970 in the Kashibashi comic strip, is far from the “mambí” (Cuban rebel fighting for independence from Spain) we know today. He is a character that was changing according to what its creator learned, who knew how to guide the fruit of his creation on the right path, like the good father he was. 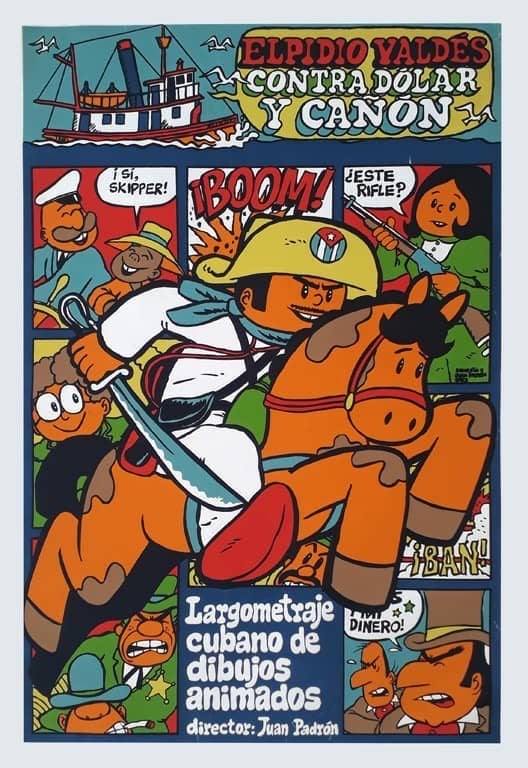 “Elpidio is a symbol”, says Silvia, the youngest of Padrón’s children. “He lives in the soul of a society with many years of struggle, and yet in the midst of all this, Elpidio has made more than one person smile, and he has made us all enjoy and know more about ourselves, about the Cuban people and our history, which are not minor things”, she adds.

“I think that, although many times we are in contact with symbols, this is undoubtedly the most Cuban one, and it would be a tragedy if it was lost over time because there are other symbols of other societies that remain alive and that does not occur spontaneously, it has a job behind it ”, she tells us.

With her we talked about the iconic cartoon, Elpidio and Juan’s coexistence, the dreams of both of them, and how she intends to keep alive the legacy of Padrón, and her favorite character.

Do you remember when you realized that your dad was the one who made Elpidio?

I do not exactly remember the moment when I discovered that my father was the one who did Elpidio Valdés, but I did know it because a teacher corrected a spelling mistake when I wrote “El pidio”, like that, separated in two words; I felt very ashamed. How could I have a misspelling if my dad was the one who made that character?!

For me it was very natural for my father to do that, having had a childhood as the daughter of Juan Padrón taught me many things, like the fact that even if you are very successful, or a great artist, or someone very cool, you don’t have a reason to feel superior to anybody.

My father was a very ordinary person, my mother cooked and he washed the dishes, my mother did one part of the laundry and he did the other, he brushed things by hand in the laundry room, rinsed the sheets when automatic washing machines didn’t exist, he was in charge of cleaning the car … It was all very ordinary on one hand, and, on the other, since I was little I had contact with special people. Getting to know Quino and other artists enriched my childhood, my parents’ friends were also great professionals with whom you could talk about history or politics.

How do you remember those years of your childhood?

It was a cultural enrichment. The best memories I have from my childhood are with my dad, maybe that’s why I adore him. It was a lot of fun, we were always making jokes with each other, playing games. He spent time with me; if he was cleaning the car, I would prepare crackers with mayo for him to have a snack; he would always help me with my homework, he would do the covers for my assignments before computers appeared, and I loved it because they were so cute. He was always a very close father.

Did they participate in the Elpidio creative process at home?

The creatives of the family are my father, my uncle Ernesto and my brother Ian. I know that my uncle participated many times in the scripts, helping where there was some unresolved question, or when he did not know how to solve a certain situation. My uncle would always give him some advice.

My brother also helped him a lot since he was very young. He gave him some ideas, participated in the recording of the voices… there is a famous anecdote about that.

Was he jealous or hoarder with the character?

Elpidio Valdés, being one of the most liked characters, has had many reproductions, for which he has suffered several damages. Pop suffered a lot from the deformations that were made to the design, the bad drawings, also the extrapolation of the character to other instances or historical moments that had nothing to do with him; also, when Elpidio became the leader of causes that were not those of the ‘mambises’.

He always wanted to be respected in his historical moment, in his cartoons. We have been working in recent years so that anyone who is going to make a work based on Elpidio Valdés at least requests authorization, because we would like to continue taking care, as he did, of the line and the drawing.

How similar are Juan and Elpidio?

My father was not as heroic nor did he have as much prominence as a leader, as was Elpidio Valdés, but without a doubt, Elpidio has all that Cubanness and that patriotism that my father had.

He was very Cuban, but not stereotypical Cuban such as those who play dominoes or those who speak loudly, like other things that can be associated with us. He was the one who goes to the essence of Cubanness.

He was anti-imperialist, anti-colonialist, and rejected any manifestation of imposition that Cuba could suffer. In that, he was very patriotic, not chauvinistic at all, but he did not accept impositions from a foreign power.

He lived with great pride in being Cuban.

Was he still working at Elpidio?

My father was a genuine artist and like all artists, he never stopped creating. He had many ideas, many projects that were left unfinished, one was to make a 3D of Elpidio because he wanted to leave an image that could be replicated and that was to his liking.

He left ‘La Manigua’ project unfinished. He was also working together with my brother to rescue the originals of his work, and we had started to think of a book where the different Elpidio comics would be compiled. Especially my brother has worked a lot on the book during these months, which my father could not get to see either.

He was also working on an unfinished comic autobiography, he wanted to do cartoons again, he wanted to finish the Book of the mambí that he started it and he left some pages unfinished… the list is long.

In recent years I have dedicated myself a lot to help my father in the protection of his work. In that sense, many things that are coming out now for the 50th anniversary. We have been working on them for a while now, but that’s not the only thing that I do, although I am hope to dedicate myself to it in the future.

That includes the website’s work. What can we find there?

On the website you can find, for example, a section dedicated to him, where you can find the main moments of his life; since he was little, later when he began to create Elpidio, his professional relationship with Quino, which was also very important, and the projects in which he was involved lastly.

There will be a list of different Elpidio data, from a characterization of each of the characters, the shorts, and long films, books that have been published about Elpidio and documentaries that have been made about him.

On the site, you will also be able to find the description of the cultural and recreational center La Manigua, a project that my father and I had been developing with the support of the Ministry of Culture, the Fund for Cultural Assets, the Government of the city and other institutions that will be added.

When it comes out it will be those three sections: La Manigua, the figure of my father, and Elpidio. But the page will continue to grow. It will have a section dedicated to Vampiros en La Habana and to other specific works.

What state is La Manigua in?

Let’s say it is still in the planning phase. In the next semester, the construction works will begin, but I am happy with how the spaces are turning out. We are ensuring that the concepts that we had initially are materialized. We wanted it to be a place with a lot of interaction and games for children as well, where there would be a promotion of the best values ​​of Cubanness.

My great dissatisfaction was that my father did not get to see it. Everything we talked about now remained at the dreaming and aspirations level for him, but I am happy to have the institutional support to carry it out and that on this 50th birthday of Elpidio the work begins to be executed.

That is part of my life purpose. Keeping alive Elpidio and the rest of his characters, because it makes us recognize ourselves and laugh at ourselves (because many times we are too solemn) and also makes us feel from the right side of the heart.

Carlos Acosta, to the Board of Governors of the Royal Ballet School

Padura: Trotsky’s assassination and the voracity of power