Just getting back to the United States, after spending two weeks in Cuba, Ana de Armas, the sensation, granted an interview to the New York magazine Vanity Fair that is published in the March issue as the main feature, setting aside its cover for this 31-year-old beauty.

“I came directly from Havana, so I’m wearing plane clothes. My bags are full of clothes, medicines or supplies, whatever people need, and come back empty,” she says to New York writer Sloane Crosley, her interviewer. 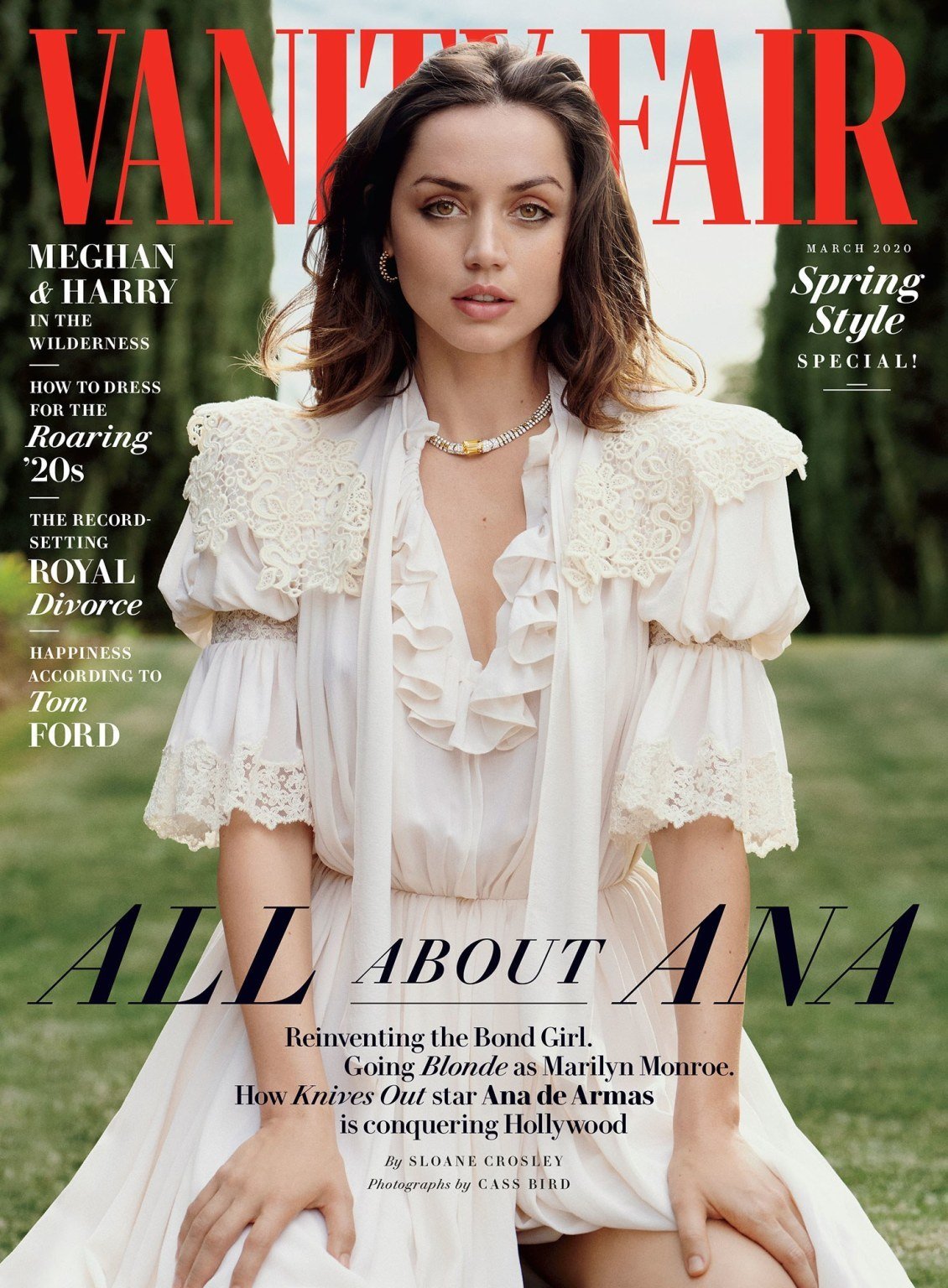 The conversation takes place at the Versailles Restaurant in Culver City, California. Because of the atmosphere, reminiscent of the Miami restaurant, each of the phrases smell like Cuba. They eat beans. “This is my fuel, says the actress. As for the drinks, she chooses the daiquiri, because for her the mojito seems ‘too Hemingway, too obvious.’”

There’s still one day to go for the awarding of the Golden Globes (whose gala took place on January 5), therefore the question of whether the young Cuban would win the award for her interpretation of Marta Cabrera, for which she was nominated for Best Actress in the comedy Knives Out (2019, Rian Johnson), is floating in the air.

In the end, she didn’t go beyond the nomination, but the film also put her alongside artists such as actress Jamie Lee Curtis, who believes that De Armas will be like Sophia Loren, one of those faces one will come cross everywhere, and also considers that although she has an “exquisite depth and is singularly gentle and incredibly beautiful,” she is, perhaps and above all, “a girl from Cuba, which is why she has that tenacity, perseverance and ferocity.”

Another actor with whom she stars in the film is Daniel Craing. The two will be seen together when No Time to Die (Cary Fukunaga) is released, the last part of the famous Agent 007 whose premiere has been postponed by the coronavirus in China. But, Ana de Armas has already worked and rubs shoulders with movie stars, becoming one more.

On this new reality she warns: Hollywood “is not my life, it is my reality.”

“I have great friends, and incredible things have happened to me here, but the lifestyle, exposure and constant business situations are not for me. I like to talk about life and art and babies and pets. Acting is what I love to do, but I can’t talk about it all the time,” she says.

To sum up this circumstance, she quotes Marilyn Monroe: “It’s good to have caviar, but not when you have it at every meal. Beans, maybe. But not caviar.”

In fact, one of her most anticipated works will be the interpretation of the famous Marilyn Monroe in Blonde, the adaptation for the film of the well-known novel by Joyce Carol Oates directed by Andrew Dominik.

Ana de Armas spent New Year’s Eve in Cuba, along with her parents who do not attend the premiere of her films and have to see them in pirate copies. She had a party in Old Havana with family and friends, actors she admired since she was only an artist project

She also spoke in this feature about those beginnings, theater studies, her habit of hitchhiking from one place to the other and about a reality she found better reflected by Cuban actors than Hollywood: “Cuban actors were the ones I looked at because that was my reality: people getting on a boat or shouting at each other or killing a pig.”

The young actress’s career is well known. She came from “one of the few Cuban families without relatives in Miami,” so when talking about the future her repeated conversations pointed to Spain. Una rosa de Francia. Madrid, at 18. The TV series El Internado at 19. Hollywood, at 26.

Although she herself says that “the Cuban helps,” that career, above all, seems to be the result of a temperament that does not fear obstacles, incredible challenges such as money or language. Sometimes she didn’t know what she was saying in a scene, but she knew exactly what was happening. That was enough to convince. Maybe all that means “the Cuban.”

This was Ana de Armas’ conversation with Sloane Crosley for Vanity Fair, savoring beans and talking about Cuba; so much so that during the interview several things make her think of the country from which she has just arrived: the lights flicker for a moment. “Like in Cuba,” she says. At an adjacent table they’re singing happy birthday to someone. She complains somewhat disappointed: “This is not how it’s sung in Cuba, how horrible!”

The best of Cuban cinema made at ICAIC, according to the Cinematheque of Cuba

Romeo and Juliet: ballet again joins Cuba and the U.S.